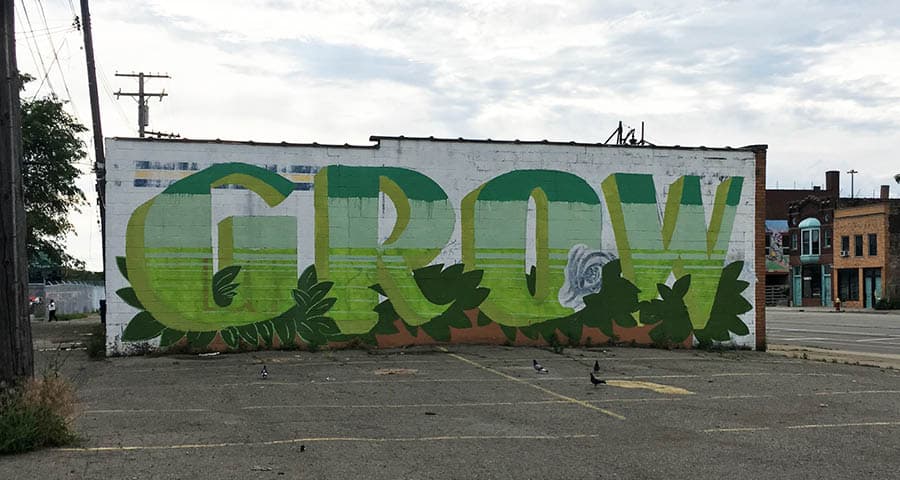 Due to economic decline and population loss, the typology of retail districts in America’s legacy cities has become incompatible with the communities they serve. Responding to these issues, the Detroit Economic Growth Corporation (DEGC) tapped our Research & Analysis Team to perform a multi-district retail opportunity study to better understand Detroit’s retail landscape. Beginning this March, we examined 12 of Detroit’s commercial corridors, taking inventory of each area’s retail supply and generating recommendations at both the neighborhood and citywide level. From the study, we discovered that although Detroit’s commercial corridors face a unique set of obstacles, they provide several important lessons applicable to commercial districts throughout the country.

Uncovering a commercial corridor’s identity can spark a retail renaissance.

Many of Detroit’s retail corridors possess strong identities that reflect their history and culture, but the potential of these identities to serve as powerful branding and marketing tools has been largely underutilized. For example, the study uncovered the opportunity to market a unique cluster of retailers along Livernois Avenue by highlighting its historical status as Detroit’s “Avenue of Fashion.”

To bolster these branding efforts, each retail district should consider producing marketing materials that highlight its unique identity, undertake “road shows” in nearby communities showcasing the area’s businesses, and implement clear signage throughout the district to notify shoppers that they are in a distinct community.

Over the past several decades, Detroit has become a hub for immigrants from Latin America, the Middle East, and South Asia. The study area of Banglatown, a corridor located within a neighborhood home to large South Asian and Arab communities, has a retail vacancy rate of only 5 percent, well below the average vacancy rate of 25 percent across the 12 study corridors. The low vacancy rate can be attributed to the vibrant selection of immigrant-owned businesses that fill the corridor.

As evident in Banglatown, ethnic enclaves often show signs of strong retail health from an occupancy perspective, and thus warrant greater initiatives and effort from a community organization level to promote and safeguard their vitality — especially in cities facing declining populations. Because of the cultural diversity of America’s immigrant communities, there is no one-size-fits-all solution to supporting ethnic retail, and a culturally-sensitive approach must be taken to understand the specific needs of these districts.

In the Rosa Parks-Clairmount study area of Detroit, a traditional strip mall center serves the greater district. This center, the Virginia Park Community Plaza Shopping Center, is fronted by a large, underutilized parking lot. During a community workshop hosted by our team, a group of local stakeholders proposed repurposing the center from an underutilized space into a community destination. To activate the underutilized center, they recommended converting part of the parking lot into a public plaza, adding non-retail amenities to the shopping center, and hosting arts programs and community events in the plaza.

The proposed ideas for the Virginia Park Community Plaza Shopping Center are an excellent example of how communities can reimagine and repurpose dated or staid strip centers and plazas into public gathering spaces that foster community. By adapting these centers’ uses to align with the changing retail conditions in America, communities can transform desolate spaces into hubs of activity.

While Detroit is often touted as an extreme example of how the effects of post-industrial decline have manifested in America’s legacy cities, communities nationwide experience and share problems and opportunities affecting their respective retail economies that are similar to what we discovered in Detroit, including community identity crises, the importance of emerging ethnic enclaves as vital anchors in local economies, and the rise of vacancies in strip centers. The findings of this study demonstrate that traditional solutions are no longer effective, and to improve these conditions, involvement from a variety of groups like real estate developers, government agencies, and community stakeholders is integral in the redevelopment process.

"Telling a Community’s Story Through Brand"

"Every great place has a story. At Streetsense we focus on the art of finding and telling that story creatively, whether we’re branding a downtown district, a beloved neighborhood gathering place, a dynamic workplace, or a residential community. Here are some branding projects that we loved working on — and that got results we’re proud to […]"

"Three Ways LinkedIn is Ramping Up for Brands and Creators"

"Many of our clients come to us with a similar goal: to increase engagement across their social channels. Coming in with the assist, LinkedIn has recently announced three new initiatives for brands and creators, all of which will help stimulate engagement across its platform. Let’s dive into all three.    Articles For Pages LinkedIn recently […]"