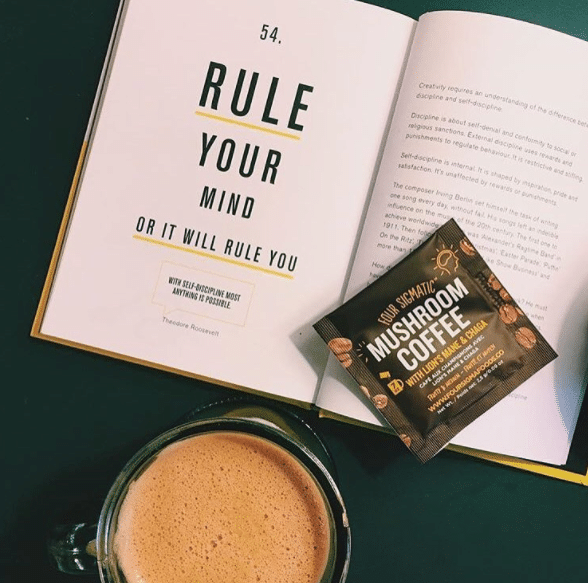 If a magical, all-natural ingredient could improve your focus, help you sleep better, and give you more energy in your daily life, would you try it?

What if that meant putting a fungus in your coffee?

Finnish brand Four Sigmatic is on a quest to turn an unconventional idea — drinking mushrooms — into “the new kale,” or the next big health movement. The company harvests several different types of mushrooms (healthy ones, not psychedelic ones), distills them into liquid form, and from there creates a powder for mixing into a cup of your morning coffee, tea or hot cocoa.

Depending on the mushroom, the potential benefits can range anywhere from mental alertness (lion’s mane and chaga mushrooms) to better sleep (reishi mushrooms) to greater energy throughout the day (cordyceps mushrooms).

For a 101-level intro into the world of mushrooms, Four Sigmatic recommends its coffee with Lion’s Mane and Chaga, which has about half the caffeine of a standard cup of coffee. Chaga mushrooms make the drink less acidic and easier on the stomach, while Lion’s Mane and rhodiola root pair up to improve brain function. In the words of Four Sigmatic’s President, Tero Isokauppila, “think of the simplicity of using instant coffee, with the health benefits of superfoods.”

That’s the theory behind it. But how does it taste? I tried the Lions Mane and Chaga coffee, and can report the following:

It might not be in your mom’s kitchen cabinet just yet, but Four Sigmatic’s product line has already garnered media attention from prominent press outlets that include Forbes, Time, bon appétit and well + good. Tero himself has become something of a medicinal mushroom subject matter expert, making appearances on a number of wellness podcasts including The Ultimate Health Podcast, The Life Stylist and That’s So Retrograde. The brand’s website has also collected shout-outs from popular influencers in the fitness and overall wellness spaces.

With traditional media mentions (and podcasts) firmly in place, Four Sigmatic also developed a strong presence on various social media platforms: Facebook, Instagram, Twitter and even YouTube. The brand uses a fun voice, gorgeous lifestyle photography and a quirky sense of humor to promote its products and their surrounding benefits, making the relatively unfamiliar practice of drinking mushrooms feel human and approachable.

The company’s YouTube channel, meanwhile, offers quick, engaging video explanations about its most common mushrooms. Each clip is filmed outside, with a background flooded with trees and natural light, as if the viewer is “hunting mushrooms” with the company’s founders themselves. On top of that, the brand has created Mushroom Academy, a relaxed, conversational online course that covers any potential questions about the company’s proclaimed superfood (or superfungus, if you will). So far, this digital strategy appears to have worked. Four Sigmatic has grown its fanbase to over 60,000 fans on Facebook and over 25,000 Instagram followers, while its introductory video, “Give Mushrooms a Chance,” has currently received 18,609 YouTube views. Four Sigmatic is making a valiant effort to turn an obscure corner of the superfood market into an intriguing, approachable adventure for new consumers to try. At the very least, we’re starting to see mushrooms in a whole different light thanks to these four self-proclaimed funguys from Finland. Now excuse me as I test out its hot cocoa!

"Like most things in life, change is inevitable, especially when it comes to emerging features on social media platforms. Change doesn’t have to be a bad thing though, in fact, we’re embracing some of the newest Instagram features that have debuted over the past few weeks. Here are three we’re most excited to use:   […]"

"The Expiration of Twitter’s Fleets Functionality"

"Twitter recently announced, in a self-aware Tweet, that they were sunsetting Fleets, the stories at the top of the Twitter timeline that expire after 24 hours. In a reply Tweet, Twitter said, “We hoped Fleets would encourage more people to join the conversation, but that wasn’t the case. So we’re removing them and focusing on […]"

"Jeff Pollak, Streetsense Managing Principal + Vice President, sat down with our partner CBRE to discuss Activation and Placemaking. Jeff, a 30-year real estate veteran and one of the nation’s leading retail consultants, has worked on every type of consumer environment imaginable. Get a glimpse into his conversation with CBRE: How should investors be thinking […]"