We’re thrilled to support our partner Logitech as they launched a new brand campaign, DEFY LOGIC, featuring creators, artists, and activists who are defying expectations and breaking barriers to inspire and change the world. The centerpiece of the new campaign was Logitech’s first-ever ad that aired during the Super Bowl, featuring GRAMMY-award winning rapper and songwriter Lil Nas X and other changemaker creators, artists, and activists.

The campaign, anchored by the Lil Nas X spot in the first quarter, ran across broadcast media and social platforms. Streetsense’s content team developed a full social plan to roll out social media support for the #DEFYLOGIC campaign both in the lead-up to and real-time during the big game.

“Trusting, highly collaborative clients make for extraordinary work. In partnership with Logitech, the kickoff of the #DEFYLOGIC campaign has been a whirlwind, highlighted by an amazing effort this past Sunday by our combined teams. I’m very proud of the creativity around how we leveraged our social channels to amplify the message from the ad and spike engagement with our current followers, other advertisers and a new audience throughout last night’s game. So much more fun to come!” – Tom Frank, Executive Director of Marketing

“As a brand with a first quarter spot, we wanted to position ourselves alongside the other fierce brands on TV, and live-tweet throughout the game. Once our commercial aired, we knew people who didn’t follow us before we’re going to check us out on social, rightthen and there — and we were ready for it! The fast-paced-you-blink-and-miss-it timely content we created throughout the game allowed us to show off our quick thinking creative chops, immerse ourselves in the conversation, and show off the fun brand that is Logitech.” – Alexa McKnight, Senior Content Strategist 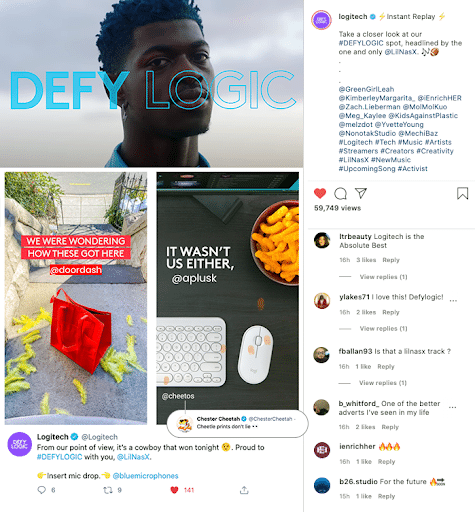 BACK TO LATEST
The Shape of What’s Next 06.24.2022
To BeReal or Not To BeReal 06.15.2022
Women Leading the Way 06.11.2022
Streetsense Talks Trends in Gaming and Multifamily at the TecHome Builder Summit 06.09.2022
3D Printing Construction: A New Solution to the Housing Shortage 05.26.2022
Client Spotlight: Earth Day 04.21.2022
We use cookies on our website to give you the most relevant experience by remembering your preferences and repeat visits. By clicking “Accept All”, you consent to the use of ALL the cookies. However, you may visit "Cookie Settings" to provide a controlled consent.
Cookie SettingsAccept All
Manage consent

This website uses cookies to improve your experience while you navigate through the website. Out of these, the cookies that are categorized as necessary are stored on your browser as they are essential for the working of basic functionalities of the website. We also use third-party cookies that help us analyze and understand how you use this website. These cookies will be stored in your browser only with your consent. You also have the option to opt-out of these cookies. But opting out of some of these cookies may affect your browsing experience.
Necessary Always Enabled
Necessary cookies are absolutely essential for the website to function properly. These cookies ensure basic functionalities and security features of the website, anonymously.
Functional
Functional cookies help to perform certain functionalities like sharing the content of the website on social media platforms, collect feedbacks, and other third-party features.
Performance
Performance cookies are used to understand and analyze the key performance indexes of the website which helps in delivering a better user experience for the visitors.
Analytics
Analytical cookies are used to understand how visitors interact with the website. These cookies help provide information on metrics the number of visitors, bounce rate, traffic source, etc.
Advertisement
Advertisement cookies are used to provide visitors with relevant ads and marketing campaigns. These cookies track visitors across websites and collect information to provide customized ads.
Others
Other uncategorized cookies are those that are being analyzed and have not been classified into a category as yet.
SAVE & ACCEPT